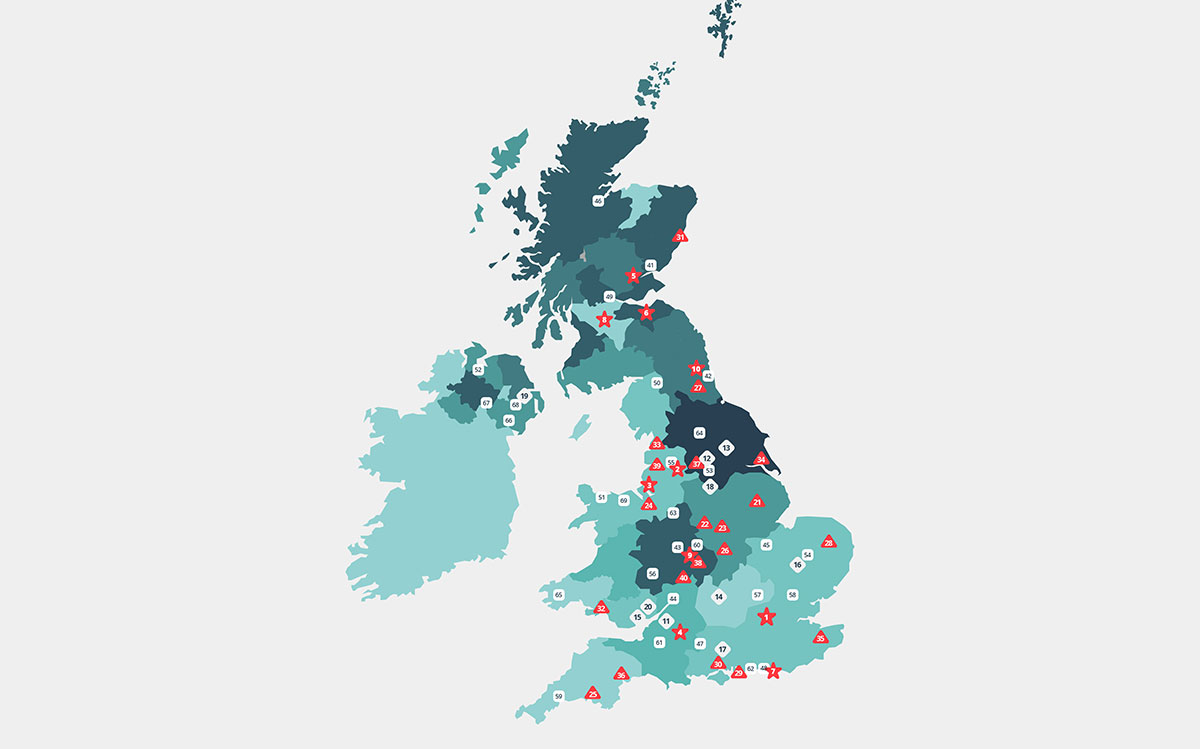 The Most Instagrammed Places in UK

The specialist tour company have put together a fun infographic showing the most Instagrammed cities and regions around the UK. The company analysed how many times each UK city name and each UK region name had been hashtagged on the popular photo sharing site.

They have then charted their findings into a map.

Not too surprisingly the capital city of London has come out on top as the most Instagrammed city in the UK. However, the amount by which it beat its competitors is quite outstanding. The city has over 65 million more Instagram posts than any other UK city. Wow! At the time the graphic was created London had been hashtaged on 76,637,747 Instagram posts.

The closest contender to London is Manchester which had 7,359,647 posts. As one of the biggest cities in the UK and one of the most thriving cities in North England it’s not too unusual to see Manchester near the top of the list. Other cities which fared well were Liverpool and the Scottish capital of Edinburgh, which had 5,416,338 and 4,514,213 posts respectively. Other cities in the top 10 include Bath, Perth, Brighton, Glasgow, Birmingham and Newcastle. Premium Tours note however that Bath, Perth and Newcastle may be somewhat of an anomaly due to the Australian cities of Perth and Newcastle also featuring on Instagram, as well as people hastagging photos of their bathtime with #Bath.

Somewhat surprising is that the UK’s second largest city Birmingham only came in at number 9 considering its large population. The city was beaten by smaller cities including Edinburgh, Brighton and Glasgow – suggesting these spots are perhaps more popular with tourists in the UK.

While the Southern city of London came out as the number 1 city, it was the Northern region of Yorkshire which came out as the most popular UK region on Instagram. The hashtag #Yorkshire had been used in 3,836,483 posts and had nearly 3 million more posts than any other region.

The result is interesting as the top Yorkshire city, Leeds came in at number 12 on the city results, suggesting people are more likely to hashtag Yorkshire than the specific city they are in. it also suggests that a large proportion of the Yorkshire posts came from the region’s wonderful countryside and quaint towns rather than its larger cities.

The region results again indicate that many of the Scotland Instagram posts are comprised by posts from the country’s famous countryside regions rather than its larger cities.

This graphic is a comprehensive and insightful look at how the UK is portrayed on Instagram. If you’re UK based it is interesting to see where your city and region ranks, and if you’re planning a visit to the UK from elsewhere this graphic serves as some great inspiration on where to visit to get those perfect travel Insta photos and take in the UK’s beautiful sights.

Grade this Infographic
Your Grade
Rate Here
Visual Design
8.5
Informativeness
6.0
Understandability
6.0
Accuracy When Created
—
SHARE
6.8
Your Grade
1 rating
You have rated this