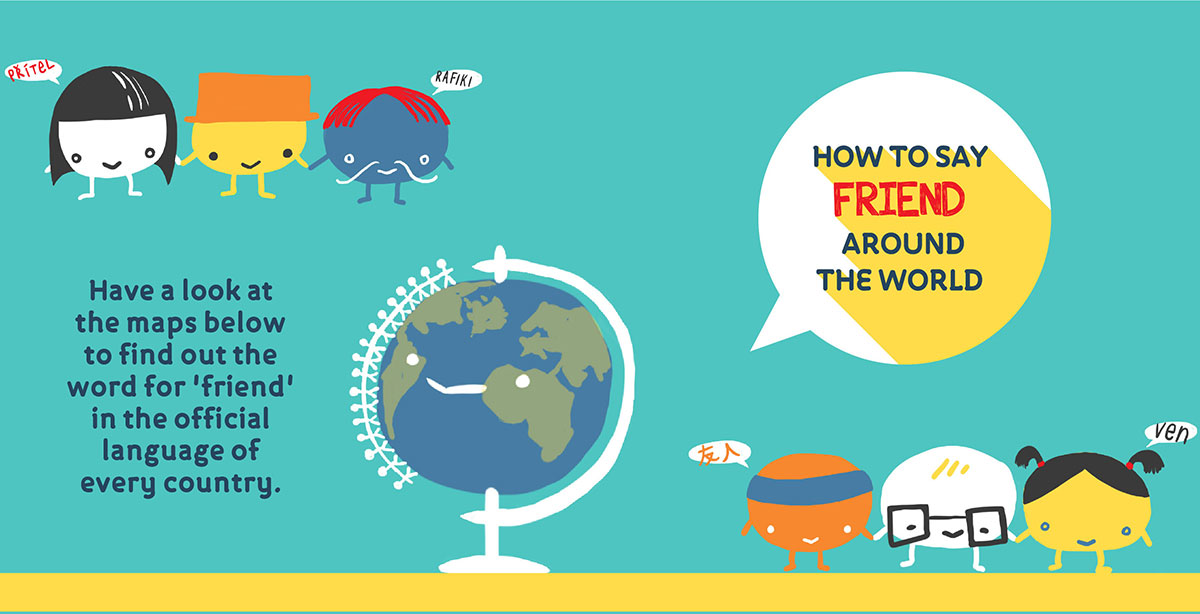 How to Say ‘Friend’ In Different Languages Around the World

Sunday, July 30th is International Day of Friendship – the perfect time for celebrating our best friends.

After all, while countries have many differences from each other friendship is universal, and many of us have friends dotted all over the world – whether it’s people we met while traveling or intrepid friends who have relocated.

Now with this handy infographic, we’ll know how to greet our friends from all over the world. While many of us may have already picked up the word for friend in languages such as Italian or German, this graphic is really interesting as it includes languages such as Estonian, Slovak and Indonesian – which not many of us learn at school.

What was cool to see is how many similar words there are around the world for the word friend. Many countries have a similar word to the English ‘friend’, such as Freund in German and fren in Bislama (the language spoken in Vanuatu). Another common theme was similar words to the French ‘Ami’, including amigo in Spanish, amigos in Portuguese and amico in Italian.

One of our favorite translations from around the world includes ‘rafiki’ in Tanzania – this is the name of the baboon in Lion King, so we guess his name was chosen because it means friend.

Have a look at the map and find out how to say friend in any country you wish, and impress your friends, amigos and rafikis around the world.

The graphic is handily split into continents with the words plotted on the map and also written on a chart underneath, making it easier to find any specific languages that you are looking for.

Find out more about the thought process behind producing the graphic and the translations over on this blog.

And why not share the graphic with a friend this International Friendship Day to spread knowledge and love.

Grade this Infographic
Your Grade
Rate Here
Visual Design
8.5
Informativeness
8.6
Understandability
7.7
Accuracy When Created
7.5
SHARE
22
Shares
8.1
Your Grade
12 ratings
You have rated this